Have you tried my alter ego?

Did you guys know I've added an alter ego?

I'm writing Young Adult Fantasy Adventure books as D.M. Marlowe!  It's been great fun exploring a new genre, learning new things, and writing a book that my kids can read!  I've added fun stuff that we've enjoyed, such as Japanese folklore, ninjas and parkour.  Check out Eye of the Ninja, the first book in my new series! 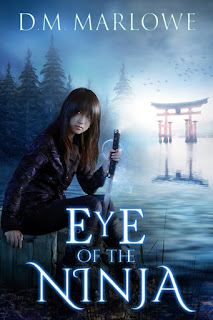 Blink—and you’ll miss her. Mei Barrett has been hiding all of her life. Raised in solitude by her beloved father, she’s been trained to fight, to adapt, to defend. She couldn’t prevent his death, however, when it comes at the hands of a mysterious creature straight out of legend. She could only run—and learn how to hide in plain sight. For four long years Mei has lived alone on the fringes of a society still recovering from the devastation of quakes and disasters along the infamous Ring of Fire. Mei’s concerns are more immediate however. She must hide her eyes and their despised mutation, and she must stay one step ahead of the strange wind demon that continues to hunt her. Detection was inevitable. But Mei begins to make some discoveries of her own. For it seems that her old enemy is not the only mythical creature on the loose. Nor is she the only one fighting them. And perhaps her own tragedies are not as far removed from those the world is facing, after all.