Obsidian's Eye! Second book in the Eye of the Ninja Chronicles!

I'm so excited to let you all know that Obsidian's Eye is out!

The second book in the Eye of the Ninja Chronicles, it carries on the story of Mei Barrett, also known as The Girl With the Stars in Her Eyes, and it includes new allies, new enemies and of course, more battles with creatures of Japanese Folklore! 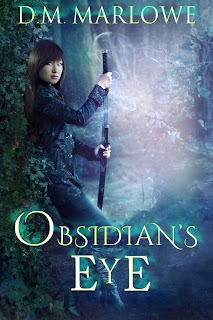 All eyes are on her . . . After four long years of running and hiding, Mei finally defeated the mysterious yokai who murdered her father. But her victory has brought her no closer to her dreams of peace, stability and a home.The Girl With the Stars In Her Eyes isn’t running away anymore. She’s moving forward instead—straight toward an even bigger monster. She’s accepted her destiny, but she has much to learn before she can defeat the evil Inaba. Leaving Ryu, she has knowledge to seek, allies to find and ruthless yokai to battle. With her go her new friends, including Ken Sato, the young man who inspires so many conflicted feelings.She’ll have to see clearly to know whom to trust . . .

I hope you will enjoy Mei's continuing adventures as much as I have!